I suggest this RGR/Ralph troll be banned

RGR is back and salivating.
I experience pleasure and pains, and pursue goals in service of them, so I cannot reasonably deny the right of other sentient agents to do the same - Steven Pinker
Top

I have been trying to ignore this poster, but the posts are now dominating the site, and I am spending less and less time here. The effect is insidious, and in my opinion deliberate. The poster clearly has the intent of destroying the site and driving readers and posters away. The tone of the points is becoming more abusive. My vote has changed to enough is enough. The poster is anti free speech.
Top

I agree, I have changed my mind as well for pretty much the same reasons. I am now beginning to see that UE's and others' initial stance were on the mark with this bugger.
Last edited by Little John on Sun Apr 20, 2014 9:56 pm, edited 1 time in total.
Top

I experience pleasure and pains, and pursue goals in service of them, so I cannot reasonably deny the right of other sentient agents to do the same - Steven Pinker
Top

I agree with UE. There's a world of difference between stated disagreement with someone's genuinely-held POV (for example, I disagree profoundly with Biff with his no-borders, J2M with his dog-eat-dog outlook, and indeed fttt UE on the importance-or-otherwise of population) and deliberately sending the conversation round in circles. When one disagrees with genuine people, it is at least possible to see "where they're coming from" and work out why.

"Ralph" actually started out more tolerable than they are now, so it was probably fair enough to give them a run for their money and see what transpired. However, it might now be time to draw the line.
Soyez rÃ©aliste. Demandez l'impossible.
Stories
The Price of Time
Top

although i found some of what he posted very funny.
Top

Heaven forbid those who continue to drive to work, buy food flown in from across the continent, take a cruise, go to a car race where they burn actual fuels, fly on vacation, use a hydrocarbon based computer or fossil fuel fired power to run it, be confronted with a reality that saw TOD die in the face of the fastest increases in oil production in one of, if not THE, oldest oil producing region in the world.

Disturbing, certainly. But even more so is the idea that those who dare to look around are the ones deemed to be a problem.

But you're not "looking around". Just, trollin'.
Soyez rÃ©aliste. Demandez l'impossible.
Stories
The Price of Time
Top

You seem to specialize in being incorrect. Would you like the committee to design a bot to do this for you? Might free up more time to concentrate on prayer to the Prophets and reading the holy peak scripture? 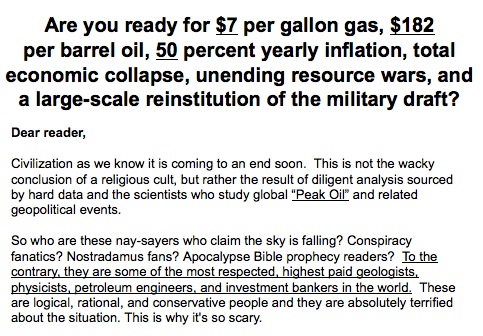 Does anyone remember the days when…IT WAS ALL SO SCARY????

Until it wasn't. Now, RC and I get more than 10% of our electrical power from windmills and such, cars no longer need liquid fuels if the owner really doesn't want one to run on them, the US is using so little liquid fuels that they are becoming a world class powerhouse of exports in refined products because all those Americans are using less, nuke power is again being approved in the US, increased prices have driven resource extraction deeper into the resource pyramid and turned the US from 40+ years post natural gas peak into the largest natural gas producer in the world, and fastest increasing oil producer on the planet with the potential to repeak oil a half century after the last one just like it already has natural gas. And all of this became apparent AFTER Charlie Hall said net energy was supposed to completely HALT drilling in the US by the year 2000.

The wars ended up being…not resource wars. The US stopped beating up folks one day, and began walking away. There was no draft. There is no 50% inflation. Gasoline never came close to $7/gal here in the States, and pickup trucks are still selling better than those previously mentioned EVs. Unemployed lawyers who imagined such things became astrologists. Any surprise there in terms of the quality of predictive ability?

Those respected scientists and bankers? Some of them cracked up pretty badly, and did it in public. Others just shot themselves. Nuke the gulf! TOD vanished under the onslaught of "past results might not be indicative of future performance" in a BIG way. Some have had their theories destroyed by resource economics 101, otherwise known as the same blind spot that allowed Simone to make a fool out of Ehrlich, and Tierney out of Simmons.

And those 150+ billion barrels that Colin Campbell once published as the total amount of oil yet to be found, back in the early 90's? Well, we found all of that. And then some more. And recently another 300+ billion of tight and shale oil.

Funny how things turn out sometimes…tell me..this RGR guy…did he buy into the all decline, all the time nonsense, or did he dare to notice how silly it all was back when it was happening? Versus all of us smart folks now, who can see all of this in hindsight? Or is it the group consensus to just ban those who dare to pay attention to current events?
Top

Why is it still here then?

Who still wants it here?
Top

Why is it still here then?

Who still wants it here?

Not sure but of course PS relies a lot on unpaid admin. What is more surprising is that this small corner of the web should receive such attention - there again, I suppose RGR/Ralph/or Whatever Is The Troll's Next Username is most likely banned everywhere else.

He already has another IP address and username lined up, of course.
I experience pleasure and pains, and pursue goals in service of them, so I cannot reasonably deny the right of other sentient agents to do the same - Steven Pinker
Top

I would now support a ban, and whilst I could do this, I do not ban established members without input from at least a couple of the original admin team.

Spammers I delete without a second thought, but not established members. It would IMO be a misuse of admin powers to ban an established member without input from others.
"Installers and owners of emergency diesels must assume that they will have to run for a week or more"
Top

We are consulting now but input from some of the original members can take time.
Action is the antidote to despair - Joan Baez
Top

kenneal - lagger wrote:We are consulting now but input from some of the original members can take time.

(Relative) politeness and less input will no doubt ensue while you deliberate.

I experience pleasure and pains, and pursue goals in service of them, so I cannot reasonably deny the right of other sentient agents to do the same - Steven Pinker
Top
Post Reply
56 posts